I had three beads sitting around that I hadn’t used very much, so decided to try to make a bracelet using them. The first one is a retired bead by Trollbeads that I bought at the concept store we stopped at in Ohio on the way to the Bead Bash. It caught my eye as something that might go well with Soul of Sunshine and I liked its golden tone. It’s called Dew Drops.

Then I have a couple of Chamilia beads that I bought from their online shop in the outlet section. They had a lot of beads for 50% off, which is always hard to resist. This one is called SuperNova Wine and Topaz-Swarovski. I love the copper wire running through it!

This one is called Felice, but I don’t see it on their webstore anymore. I was looking at the Canada store though, so maybe it’s still available elsewhere. I really like how it looks like splashes of watercolours. One thing I never realized about Chamilia Muranos is that one side of the core is like you see here, but the other side is like a Trollbead! I was really happy with these beads though and won’t hesitate to order more. By the way, Tia of Beads On a Budget has a review of a couple of Soufeel beads that she recently bought here plus has an article about holiday Chamilia beads here.

Anyway, the maple tree on our front yard has turned bright yellow. In fact, our whole street looks like this now! 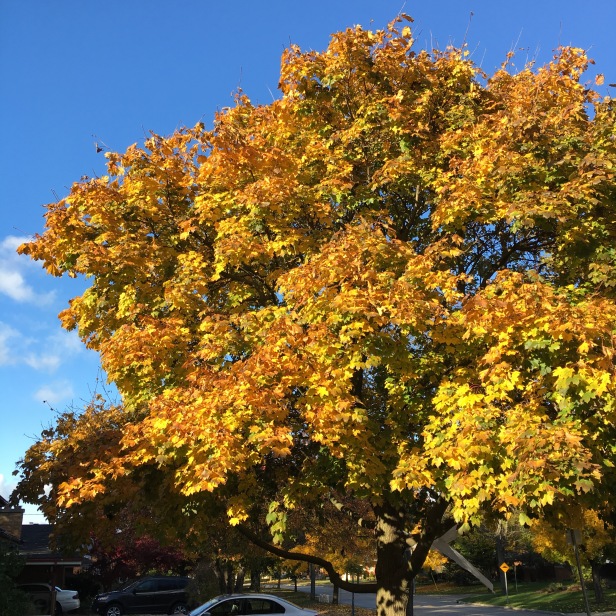 So I picked a few leaves as a super bright background for the bracelet.

Below left to right after the Scirocco are the Chamilia SuperNova Wine and Topaz, Trollbeads Scirocco, Spiritbeads Daruma and the Ohm Beads Bar Brawl.

Below left to right after the Bar Brawl are the Trollbeads Soul of Sunshine/ Strawberry Stripes and Coffee Mug.

Here’s another look at the bracelet. I love the one eye in the Daruma!

So, any thoughts about Chamilia beads or brand mixing in general? There are so many brands out there now and it’s so easy to mix and match these days. Coming up on Friday will be the new Perlen Amber beads.